Who doesn’t want to belong?

Most psychologists worth their salt will point to ‘belonging’ as one of the fundamental needs within humans. We all need connection, community and a belonging to something bigger than our own selves. Our identities are formed largely on the norms and values of those we most closely associated with, and this becomes the reference point to how we view ourselves and indeed, the world.

Children are no different, in fact arguably, their need to belong is stronger than ever in their formative years where they need an anchor point to make sense of the world. It’s a big, conflicting and confusing world out there. Making sense of it all is something that we- as adults- continue to battle with, so what about little humans with their mental and emotional faculties still under development?

One of the key missions in raising Muslim children actually works two-fold. It is for them to belong to their own community, though that community doesn’t belong to this life. Both aspects are critical and- when unpacked- it’s not as counter intuitive as it may sound.

“Islam began as a something strange and it will return to being strange, so blessed are the strangers.”

This is a narration many of us would already be familiar with, but what can it tell us about the way we raise our children?

Young believers today are tasked with navigating a way of living that is the antithesis of the majority of the mainstream society’s messaging. The challenges lie in many directions:

These are challenges we face as believing adults and no doubt, are part of the spiritual inheritance our children are bequeathed.

You are a perfect stranger when living in a world that pulls you towards a nafs-first, self-centric approach to life.  Where you are primed to become an insatiable consumer by displaying brand loyalty before you can even walk. Where your worth is quantified by your earning potential or other superficial markers of personal success. When you resist wasteful, short-sighted and indulgent living, you are not only a stranger- you are partaking in a radical act of resistance.

Being adjusted to a maladjusted world is not a sign of health. We must embrace this and allow our children to embrace it too.

Children will have to independently manage their own relationship with their spirituality at one point. A time will come when parents must take the stabilisers off, and allow their children to ride forward equipped with the nurturing already poured into them. And because we are human, they will slip. They will experience what it feels like having stronger and weaker eeman- and face their internal battles along the way. We have to respect their journey is not our journey, just as our journey was not our parent’s journey.

It has always been about the few

Our tradition is replete with the idea that those who remain firm upon their faith will always be the few compared to the majority. Whether you live in a Muslim-majority country or not, this holds true as those who consciously gear their life around pursuing the pleasure of Allah will be a handful. There is solace in this. A time existed when Prophet Ibrahim (as) was the only believer on the face of this earth. This colossal human was described as “an Ummah in one man”. Before that, Prophet Nuh (as) engaged his people for 950 long years before only an estimated 60-80 followers boarded his ark with him. In the early days of Islam, it was a tiny blessed number of believers who would gather in the night by candle light in Bait ul Arqam to learn about this new faith.

The Prophet (saw) said in a hadith,

When the Prophet (saw) was asked: “Who are the strangers?” He  said: “They are [small] numbers extracted from the various nations and tribes.”

Being few in number is not an indicator of weakness, just as being great in number is not an indicator of being upon truth. Ourselves and our children must get comfortable not following the crowd. Looking back the wealth of examples in our tradition attests to this time and again. The names and places may have changed, but human behaviour remains the same. Across time, and in every generation, those who rise up and resist harmful norms will be small in number and considered ‘strange’ by the rest of society. This is part of our inheritance to be embraced and treasured, since we weren’t created to set up camp here anyway, we are just travelling through.

Conversations we need to be having

Though we are not advocating living off grid with a patch of alfalfa and nettles for breakfast (though… that works too)- rather it is a mindset that can be carried by every young Muslim as they grow into adolescence. Speak openly with your children about things they see around them and how/why they see themselves as different. Talk about what is popular in society and whether they are the most beneficial things. Ask them what they think humans need most for a good life, and whether those are the things they see around them.

Much of popular culture is the lowest common denominator between people, designed to appeal to the masses in the quickest/easiest way. The messaging contained within it is also used to disguise vice as virtue and virtue as vice. We don’t live in a time where communities come together as a protective safety net against harmful behaviour- instead we live absorbing ideas that promote vice as an aspirational, normalised and exciting life goal.

Ground them in sure knowledge of the values of their faith, and how the perceived restrictions within it aren’t there to make life difficult, but as a protection for them and their souls. Speak to them about the framework of Islam- and how everybody lives within one kind of framework or another. Ask them what they think it means to be a successful person. What does a successful life look like? What is a life worth living? Remind them believers are meant to achieve the best they can in this life, however the definition of ‘success’ is a lot vaster than the restrictive standards of society.

Gift your children with confidence within their own skin, inculcate bravery and the understanding of higher ideals so they are the ones setting the agenda and not following other people’s. Allow them the space to think critically about the society and world they are living in, and decide for themselves what their standards are. Tell them they can be both an observer and participator in society, one they engage with on their own terms.

Finally, allow them to understand that often the dominant and mainstream culture is not always aspirational. Popularity of a behaviour, idea, trend is a poor indicator of value. Sometimes you will have to get comfortable on the fringes and understand this is not a weakness, but a huge strength of character. If your children have ever felt a strange feeling in their gut about being a believer in this world, then this is a point to draw comfort and exhale, since blessed are the strangers. 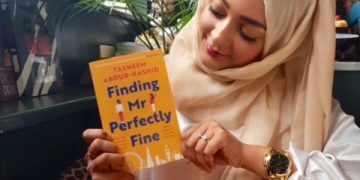 How to Publish a Book – part three Early Learning: At What Age Can We Start Teaching By Iroda Ahmed

When A Husband Hates Hijab