The hijab journey I’m about to tell, is not really my own. It is my now eleven-year-old daughter’s.

I never thought I would have to worry about my daughter wearing a hijab. It’s a given, I thought. When the time comes, of course she will. I was reassured by the little but significant signs when she was barely three years old. She was always seeking out the hijabi minions in nurseries or hijabi teachers. She seemed drawn to hijab wearers like a moth to a fly.

This was then reinforced when at the tender age of six, she insisted she wanted to wear hijab all the time. I had to sit her down and explain why she didn’t have to wear it. I went as far as to dissuade her and let her wear it in short bursts only. I still remember cringing when she was proudly wearing it in public, mainly because I thought people may think I was forcing her (we were out shopping). I loved her to wear it to the masjid however. This conflict always filled me with secret shame and I thought I was such a hypocrite.

Whatever my feelings, I allowed her to be herself with it on and off, and didn’t let on to her what I was really thinking as I still wanted to foster her natural love for this crown. I promised her she could start wearing it at school in year 5. I always felt my little princess was always searching for her identity, never really being herself and fully comfortable. I felt terrible that I couldn’t give her the comfort of the hijab that she so sought.

Fast forward a few years, come year 5, she was nine years old. She quickly informed me, before I could remind her, that although we agreed to start hijab then, she would rather we waited until she started puberty or Year 7 in secondary school (whichever one came first). I groaned inwardly as I knew I may have a battle on my hands. She had changed. She was no longer looking at hijab longingly.

Although, out of school, she loved experimenting with hijab styles and showed interest, she was very aware of her peers and not wanting to stand out. She maturely explained to me that she didn’t want anyone to treat her differently. That if she had always worn it, then people would be used to it from the outset. She was now terrified of change.

This time I encouraged her, and told her for practice, she had to wear it from year 6 and not year 7 at school. It will be a new year, and people will just have to get used to it. Although she reluctantly agreed to this compromise, I knew that it would be hard for her to find the courage.

Soon after she started year 5, with all the curriculum unpredictability, we decided to switch schools to an independent faith school. Hijab here would be part of her uniform.

She was finally relaxed. Free to be herself. She wore her hijab like a glove, as if she had always worn it, and became so comfortable in her own skin. Maybe a bit too comfortable (!). I found myself reminding her to brush her hair and she would reply ‘No one’s going to see it ammu!’ or ‘I don’t have time, tomorrow inshallah!’

On a weekend shopping trip, I even caught her pyjamas sticking out of her long ‘dress’ only for her to turn around and I saw she had whipped on an abaya on top of her pyjamas. ‘Why have you not changed?’ I exclaimed only to be told ‘Oh don’t worry ammu, I’ll be back in no time. That’s the whole point of abaya, no one can see!’ before she cheerfully got into the car.

I don’t know what her future holds, but for now, she was finally one of us . 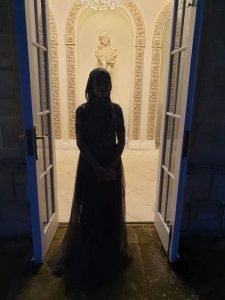 This photo was taken last summer (where has the time gone?!). She has mashallah grown into the butterfly I always knew she was, comfortable in her own hijab, in her own skin. Wearing it with love, the support and the encouragement that I should have had the courage to impart when she was younger so many moons ago, she is truly worthy of all duas.

May Allah protect her, bless her, preserve her purity of heart and all the success and goodness for both worlds, ameen! May Allah keep her steadfast, hold on to this hijab with love and sincerity, to wear it for Allah’s Sake only, ameen!

I would love to hear how you have or intend to instill a love of Allah and hijab within your daughters. Let’s share ideas and inshallah help each other by leaving a comment.

The Reality Of A Sexless Marriage by Shabnam Nazeer

And So The Grief Goes On… by Nafisa Rahimi