by Nabeela Khalid
in Featured, What we're watching
0 0
1 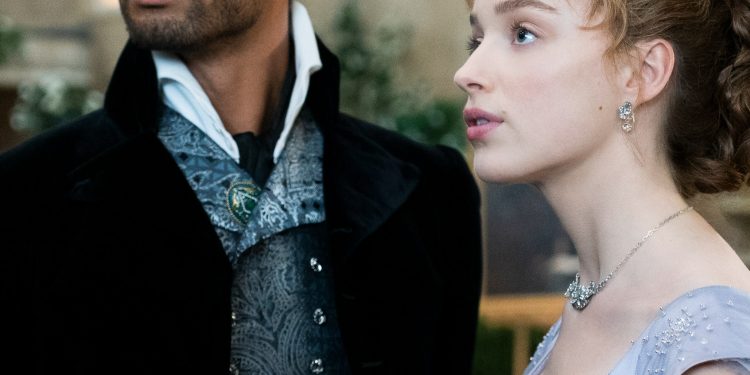 I was really looking forward to Bridgerton’s release on Netflix.  I always keep an eye out for a period or historical drama. My love for them was started by Downton Abbey.  Even now when I think about Downton, it’s still my all-time favourite.  It was just so beautiful. The way they spoke, the family, the scenery, the house and the clothes, I loved it all.  So, I went into Bridgerton very optimistically.

Bridgerton is loosely based on Julia Quinn’s novels set in the competitive world of the Regency era in London. It’s different to other period dramas because it is narrated by Julia Andrews.  The show follows Daphne Bridgeton as she reaches marrying age and needs to entice a rich suiter for marriage.  She is from a well-to-do family and has numerous siblings.  Across the road from the Bridgeton’s is the Featherington family.  They also have daughters competing for marriage proposals.  The story starts with the daughters of these families going to various high society parties to find eligible suitors. We watch as the different girls find their future husbands.

I found Julie Andrews slightly annoying with her voice overs but got used to it eventually.  She had the role of the town celebrity news and scandal writer. There were a few actors new to me but Nicola Coughlan who plays Penelope Featherington wasn’t one of them.  She is the Irish actress who played Clare Devlin in the fantastic comedy Derry Girls.  Although she is a great actress, I just couldn’t see her in this drama.  The same could be said for the actress who played her mother.  They just didn’t seem to fit into their roles.  I just needed more regal actresses.

Daphne herself came across really bland and boring in the first 2 or 3 episodes.  I was actually losing interest at this point.  But when the Duke of Hastings came along things definitely improved.  I think Regé-Jean Page who played the Duke, Simon Basset saved me from switching off.  Ok yes, he is very good looking and plays the moody part brilliantly.  He actually brought to life the character of Daphne.  The chemistry between them was fantastic.  I wanted to be Daphne and look into his eyes.  Let’s not go any further there as I think you get the picture.  The stand out actress for me was Adjoa Andoh, who played Lady Danbury.  She was perfect and so believable in her role.

Things which didn’t work for me included some of the casting, costume design and the never-ending sex scenes.  The actress who played the queen was dull and unconvincing.  Some of the other characters were also awkward and seemed unbelievable in their roles.  Another major point was the costume designs.  The dress designs were fine but some of the colours were really bright and out of place, especially for the Featherington family.  Maybe it was me because I was so used to the stunning dresses in Downton Abbey and The Crown.

This was the first period drama for me that had so many sex scenes.  Be warned that the scenes are constant after episode 3 and in my opinion a little unnecessary.  One good thing about Bridgerton was that it was racially diverse.  The cast was full of people of colour playing high societal roles, something no other period drama has done.  I thought it was a breath of fresh air and surprised this hasn’t been done before.

Would I watch season 2 if there was one, Yes.  It’s a light hearted drama and not very historically accurate but it’s a nice way to forget our COVID-19 life for a few hours.

Did you love it or loathe it? P.S No spoilers in the comments please!

A proud blessed mother of 3 boys. Enjoying the different stages of motherhood and all that they entail. Working part-time and forever trying to fit everything in. Netflix and chill is my motto when my kids are snuggly sleeping in bed.

Divorce Is Your First Choice Or Last Resort by Hosai Mojaddidi