French rulings on wearing the hijab by Rumki Chowdhury

by Guest Writer
in Discrimination, Featured, Interesting reads, Life As we Know It, Muslim Spotlight
0 0
0 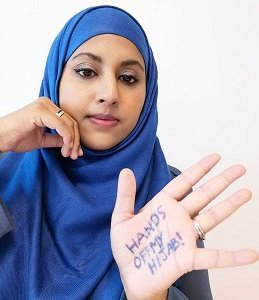 The French government might as well say that we can’t wear socks with sandals anymore.

French hijabis are being forced to supplement their hijabs with hats because their choice of clothing, their choice of wearing the headscarf, goes against what the French government stands for…which is, what? I thought Paris was the fashion capital of the world?! Unfortunately for them, the French are moving backwards when even Queen Elizabeth, Michelle Obama, Angelina Jolie, Jennifer Lopez, Audrey Hepburn and Liz Taylor, just to name a few, rocked the headscarf at one point in their lives!

After all, Nobel Prize Winner Tawwakul Karmen said, “Man in the early times was almost naked and as his intellect evolved he started wearing clothes.” How intellectual is it of the French government to ban hijab, then? It’s okay to ask questions about my choice of clothing, but to question my choice of clothing is just…not nice.

On March, 2021, the French government decided that no woman under the age of 18-years-old can wear the hijab in public spaces, mothers wearing hijab cannot accompany their children on school field trips, Muslim shops must sell alcohol and slaughter of halal meat is forbidden, Muslim patients cannot request a doctor based on their gender: there is a “prohibition in the public space of any conspicuous religious sign by minors and of any dress or clothing which would signify interiorization of women over men.”

“The process of making things such as skills, attitudes, thoughts and knowledge a part of one’s own being.” So, no self expression whatsoever or does this only pertain to Muslims, particularly Muslim women?

This is a result of a gradual change in laws due to the growing Islamophobia in the country although I am not sure how telling someone what they can and cannot wear is going to affect the country in any way. Muslims, with or without headscarves, will still be Muslims and Islamophobia is most likely not going to end, which is sad and to think of the possibilities of the outcome, the possible bullying and attacks, is just, plain, scary for us. Of course, it is blatantly obvious that what they really want is to completely ban Islam and Muslims from France.

As of 2011, the French government banned Muslim women from wearing burqas, a loose long dress and the niqab, the face-covering that only reveals the eyes. That means that women cannot wear niqabs in the place of face masks due to the Covid-19 pandemic. They must wear masks. Any breach of these laws can result in a fine up to €150, and/or participation in citizenship education.

As of 2016, the burqini, a full-body swimsuit, was banned in certain municipalities in France.

While the USA has Ilhan Omar, a hijabi, as a member of their House of Representatives, France is way behind in politics too!

Unfortunately, France is not the only country to ban Muslim head coverings, face coverings or clothing. In fact, such laws are too close to home where parts of Sweden have already banned hijab under a certain age and where the government is constantly debating a possible ban on hijab for a woman of any age. The EU, as a whole, permits employers to ban hijab at their workplace and appears to support the movement. In 2019, Quebec passed Bill 21 whereby public servants including teachers and police officers were no longer allowed to wear their hijab with their uniform.

But, that’s the thing.

Why employ a hijabi, in the first place, if you didn’t trust she could do the job, right? Why entrust a woman whose choice of clothing you fear so much?

No logical answers appear. We pay our taxes, we send children to your schools, we work alongside you and as a teacher, what kind of example would I be setting if I took off the one thing that I chose to wear to define my individuality, my identity? Should I tell my students, “You can no longer be individuals? You cannot be yourself, anymore? You need to change who you are to become someone you are not!”

Hijab, for me, is a visual representation of Islam and I wear it proudly.

If you go out in uniform, whether you are a soldier, a police officer or a student, you are representing something much bigger than yourself; in wearing a specific garment, you are exposing your identity to the world and proudly so! That is what hijab is, a proud representation of a minority within minorities in non-Muslim countries.

Social media is a beautiful platform that connects people from all over the world; the amount of solidarity with the sisters in France is evident. We have Muslims and non-Muslims, males and females, posting up photographs with #handsoffmyhijab #handsoffherhijab #handsofftheirhijab. We even had people fasting with us or wearing hijab for 30 days during the blessed month of Ramadan #fastforunity #hijab30.

Join the movement. Support our sisters in France. You never know it could be our country next.

Rumki Chowdhury is a published author, poet, journalist and English teacher. She writes for Hayati Magazine, the Parenting section of Brown Girl Magazine, Bengalis of New York, and Auliya Women Magazine. Her published books are “Her Feet Chime,” “So Complicated,” and “Unveiled.” She is an active blogger on writing advice and is currently working on her fourth novel. Not to mention, she is a mother of three little blessings. Rumki was born in Bangladesh, raised in the Bronx, New York and Paterson, New Jersey. She studied and worked in London, UK and now resides in Stockholm, Sweden.